If you’ve just moved to the Pacific Northwest, you could be forgiven for thinking the concept of the Salish Sea has been around for a long time. After all, use of the phrase is ubiquitous.

The term is used to market everything from bottles of local microbrew or spirits from a trendy organic distillery to a local rowing club, a dive company and a variety of other maritime enterprises. There is even a Washington State Ferry called the Salish and an eerie urban legend known as “The Strange Salish Sea Foot Mystery.”

But official recognition of the term “Salish Sea” happened less than a decade ago, in 2009 and 2010, when geographic boards in the United States and Canada formally approved its use and started putting the name on their maps. 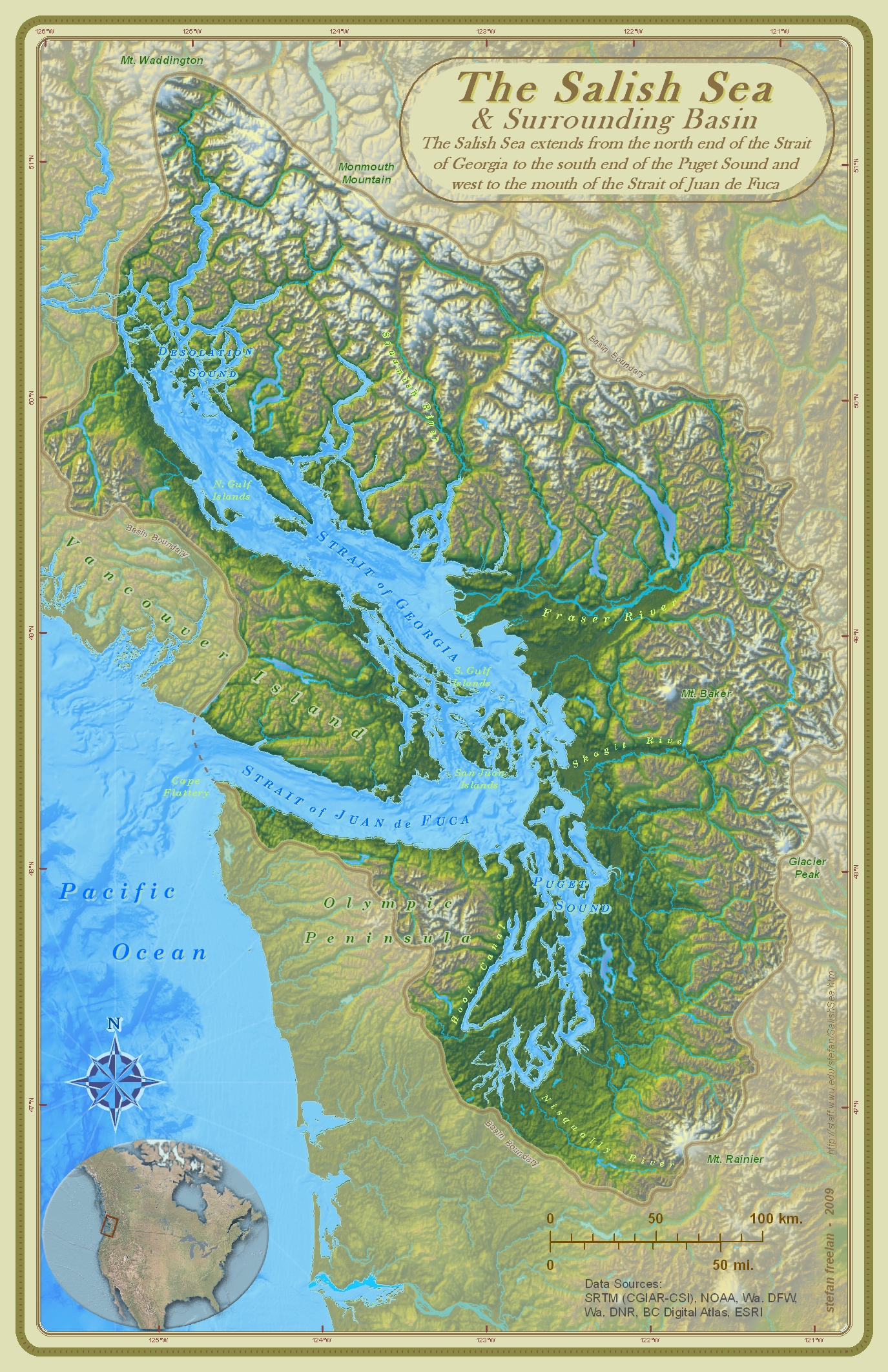 The name goes beyond the romance of the sea that seems to fuel popular branding campaigns. It’s used by scientists to describe the shared natural resources of the marine environment off the coast of western Washington and British Columbia. The Salish Sea – and the life that depends on it – doesn’t respect political borders. It drifts over and through them.

“When you start looking at how the science of it works, and how the fresh water that enters into these bodies of water mixes with the salt water, you realize that there is one ecosystem that ties them all together. And that one ecosystem is a basis for much of the riches of the resources we all enjoy,” says Canadian-born, Bert Webber, a professor emeritus of geography and environmental social studies* from Huxley College, at Western Washington University in Bellingham.

Webber devoted at least two decades of his career to promoting the idea of this shared ecosystem. It’s now recognized to cover 5,500 square miles of inland waters, including all of Puget Sound at the sea’s southern end. It extends as far north as you could go through the Strait of Georgia to the Gulf Islands and Desolation Sound in British Columbia. It expands westward through the Strait of Juan De Fuca to cover the picturesque San Juan Islands in Washington state, as well as the eastern shores of B.C.’s Vancouver Island

‘You Can’t Know Something That Doesn’t Have A Name’

Webber had his first personal encounters with the Salish Sea as a kid playing in the Pacific Ocean, at a place called White Rock in British Columbia, where he spent summers with his grandmother. He would gaze out toward Orcas Island, wondering what it was.

But it wasn’t till the early 1970s, when he started teaching at Huxley, that he really started thinking about it seriously.

At the time there was concern about oil from Alaska starting to come through parts of what is now known as the Salish Sea to refineries at Cherry Point, near Ferndale in Whatcom County.

Some people started calling that area “North Puget Sound” at public hearings or in official government documents. But there was confusion about what that actually meant.

He called it the Salish Sea, in recognition of the numerous indigenous populations here, known as Native American tribes in the U.S. and First Nations in Canada.

A Sea That Sustains Dozens Of Cultures – And 60 Sovereign Nations

The term Salish describes the roots of these indigenous languages, or a “language affinity,” Webber said. He noted that there are so many cultures based around the rich resources of the area and have been for at least 5,000 years.

Only a fraction of them are now recognized as sovereign nations, but those nations add up. Webber estimates there are more than sixty, each with some sort of legal right to Salish Sea resources.

“And how we deal with that is a very difficult question,” Webber says, noting that experts in various fields have only just begun to explore the complexities of finding out how to provide for those rights.

To that end, Webber and his colleagues at Western Washington University have just opened a new Salish Sea Studies Institute. It’s located inside the university’s Canada House and functions as kind of multi-disciplinary umbrella entity, spanning fields that refer to all aspects of human culture.

Webber says giving the Salish Sea its name has been especially important for natural scientists, whose work – like the species and substances they study – depends on systems that supersede national borders. Having a geographical entity is crucial to effectively describe and define their research.

“It’s clear that the seven million people or so that we have around the perimeter of the Salish Sea have caused incredible insult to that ecosystem,” Webber told 88.5 News in 2010, when official recognition of the name was just going through. “And in order to successfully restore and manage it, you need to know what it is you are dealing with.”

The concept he’s referring to – restoring and managing – is also known as stewardship. Stewardship is at the heart of the new institute’s mandate.

Webber now says a big part of that is keeping the focus on good science.

“Good science is good stewardship, because without good science, you can’t understand how the system works and how we can manage it,” Webber said.

Webber wants science to touch people here and now and to eventually influence the way people live their lives. That includes choices about their daily commutes or the products they buy and use.

“If we want to restore and protect it, we all have to be better stewards,” he said.

That means if you live here, Webber says you should look not just at the patch of water nearby, but recognize what it’s connected to. Then take ownership of this precious sea.

Threats To The Salish Sea 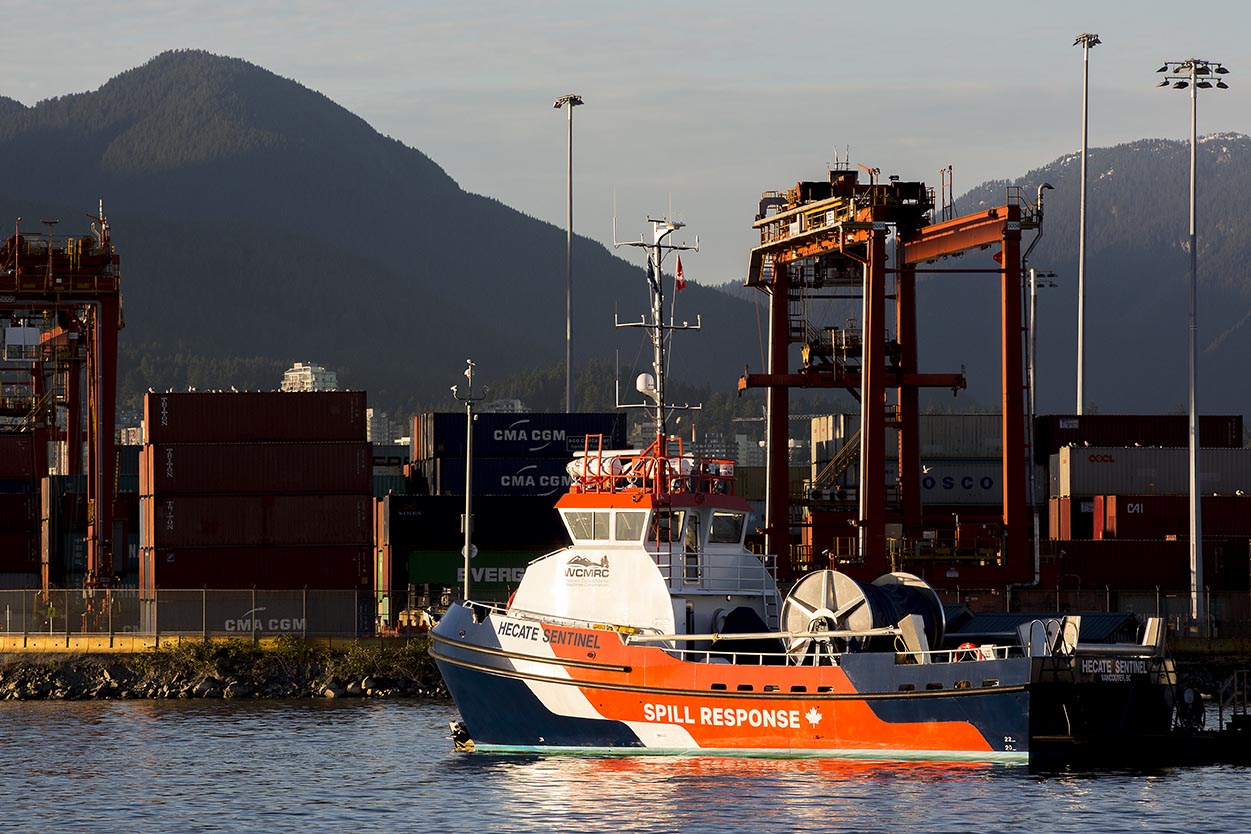 The threat of a major oil spill is just as present today as it was back in the 70s, when Webber was first coming up with the idea of the Salish Sea.

In fact, the threat is increasing. Canada has approved an expansion of the Kinder Morgan pipeline, which could dramatically increase the amount of crude oil arriving in Burnaby, B.C., just north of Vancouver.

Webber says he can understand why this issue is a big flash point. But in the longer term, he is more worried about creating awareness for less visible things.

“Oil, in my mind, is not as great a threat as some of the persistent pesticides we put into Puget Sound and the Strait of Georgia from sewage treatment plants,” he says. “In the long run I think those are even a greater risk.”

Webber has been delighted to see the term Salish Sea showing up on beer bottles and real estate kiosks. It means the concept is truly taking hold.

“I thought that when the name was adopted it would, at best, show up as a footnote in some kind of scientific paper,” Webber says with a laugh. “But it rings a bell and has touched a thread in people’s consciousness and the reality is that there is a cohort of people on both sides of the border that find the place name exciting.”

He says the name provides an opportunity for people to think about questions that were otherwise ignored. And that gives him hope for the future.

“So that the resources we all find so valuable are available to the next generation ahead and, as the first nations and tribal people say, to at least seven generations ahead of us,” Webber said.

*An earlier version of this story misidentified Webber as a marine biologist. He is a geography and environmental social studies professor emeritus in Huxley College of the Environment.